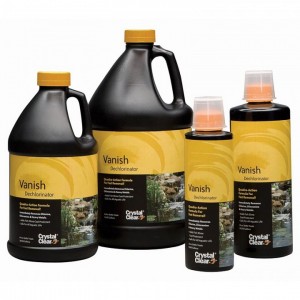 Crystal Clear Dechlorinator Even low levels of chlorine and chloramines can be extremely toxic to fish. Chlorine is a very powerful oxidizing agent and it is toxic to fish at concentrations of less than 0.05 mg/L.

Water used for fish culture should not contain any residual chlorine to be considered safe. Chlorine and chloramines cause gill damage which eventually results in gill lesions. These lesions will eventually thicken the gill filaments leaving the fish unable to utilize oxygen and release carbon dioxide, thus resulting in fish death. CrystalClear Dechlorinator (Liquid/Dry) will work to break the chlorine and chloramine bonds (chlorine + ammonia = chloramine) and reduce the chlorine and ammonia down to non-toxic levels.

CrystalClear Dechlorinator (Liquid) is phosphate and nitrate free, safe for fish and plants and has a shelf life of 3 years.

We are currently updating our prices, so all may not be accurate. Please call to confirm.

Crystal Clear Buffer - All ponds are affected by pH. Alkalinity or acidity will determine whether the pH is high or low, respectively. In order to maintain pH at a constant it requires buffering the system, which means controlling the alkalinity of the water. Alkalinity is the capacity of a natural water system to resist change in pH and is m ...

Keeps aphids and most garden insects from inhabiting most aquatic and terrestrial plants. 100% safe and environmentally sound. When applied, becomes odorless.

CrystalClear Biological Clarifier PLUS (Dry) is an all-natural, freeze-dried bacteria and enzyme complex formulated to remove nasty water and organic sludge. CrystalClear Biological Clarifier PLUS (Dry) is fortified with several billion bacteria colonies per gram and six (6) enzymes all selected and designed for their waste and gre ...

CrystalClear Foam Remover will remove protein foam from the pond or fountain’s surface in seconds. Many fountains are collection areas for a lot of organic materials. This build-up, in combination with the heavy aeration common with the splashing of a fountain or roaring waterfall oftentimes results in foam formation. Crystal ...

CrystalClear RapiClear is designed to clear water gardens and koi ponds quickly and safely by combining suspended particulate together. This process is commonly called “flocculation”. Flocculation basically means that suspended organics within the water column attract together, making the accumulated mass heavier than w ...
Departments